Last months Culinary Arts and Excellence class with Chef Hopeton St. Clair Hibbert was a big hit with students at The Cooking School at Irwin Street, such a big hit he’s coming back this month to share his amazing talents and love for great food with us again.

Chef Hopeton is well traveled with a lifetime of experience. From Australia to Belize, Amsterdam to Istanbul tasting new cultural delicacies has been his passion. Most of his culinary training has been in Atlanta, starting his career at Project Open Hand, followed by two years in Charleston, SC where he earned an Associates degree in Culinary Arts from Johnson and Whales while mastering the kitchen of Pennisula Grill. Once back in Atlanta he began his tour through the The Buckhead Life Group, putting in two years at Pano’s n Paul’s and learning the kitchens of 103 West, BluePoint, and Buckhead Diner. Finally finding a home at Eclipse Di Luna, Chef Hopeton evolved into the chef he is today. In the interim, he started a small business “Chef Hopetons: The Personal Chef Experience Services”. In 2008 Hopeton became Chef and mastered the kitchen of Atmosphere, one of Atlanta s finest French restaurants. While joining the team of Café Circa, Chef Hopeton executed Caribbean and Latin food at its finest. He is a man who loves to taste, cook and experience food on a global scale because the world is his pallet. 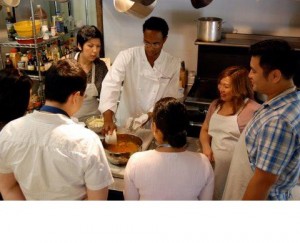